Okay, sometime before Legion actually hit, I did a post about transmogs and what I thought would end up changing or not, which weapons I'd probably mog, and so forth.  It occurs to me I'd never updated with what I ended up doing, so...

(These are roughly in the order I leveled/am leveling them.) 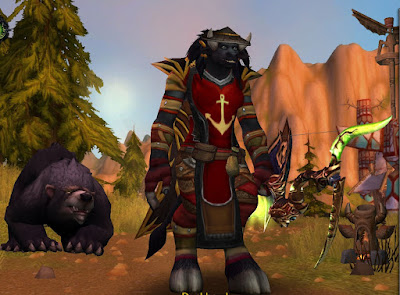 Duskhawk has ended up in level 40s-ish mail, a lot of it from Arathi Highlands and thereabouts.  The pants technically don't match, since I'd have to do an Alliance quest for the mail version, and I haven't gotten around to it.  I'm still using that belt with pouches, and the Golden Bow of Quel'thalas, because, damn, that bow.  I like how this turned out because it matches the guild tabard pretty well. 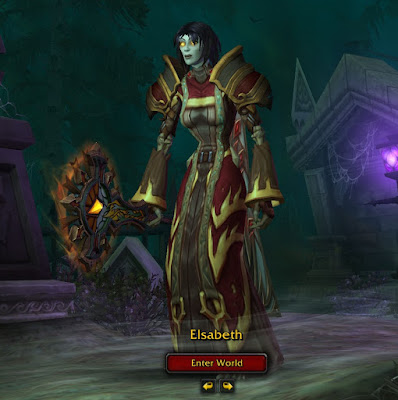 I loved Elsa's blue mog and that staff from the garrison, but between this version of the discipline staff and those robes - I really like the greenish runic band running down them.  I don't have all the color morphs of this since I didn't raid much on her. 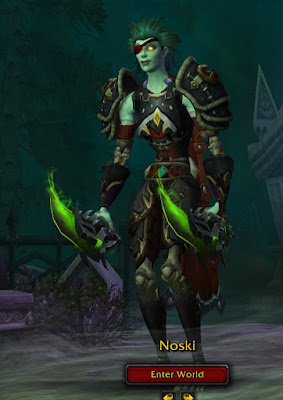 I don't like any of my rogue transmog options.  I'm going to have to do just enough of Antorus to get her the badass rogue hat in there, if I can.  I'm not great at rogue dps. 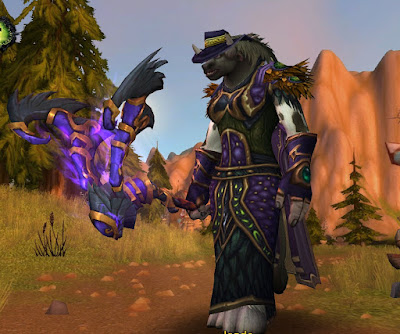 Okay, so I just kind of randomly made this mog for my druid when Legion hit, before I'd even gotten the staff, and, um.  Then I went to the herbalism trainer.  Yeah, that was awkward.  That said, this goes with the handful of colors I have for the druid staff, so I'll probably keep it a while. 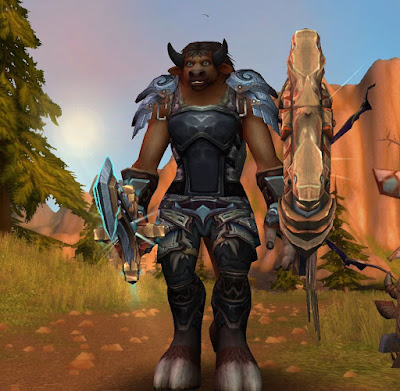 This is not Emerald Plate.  As much as I loved her in the Emerald Plate, I really like the way this came together as a sort of utility set.  The shoulders are shiny, and I'm a bit disappointed I can't get that same kind of metallic sheen on more gear. 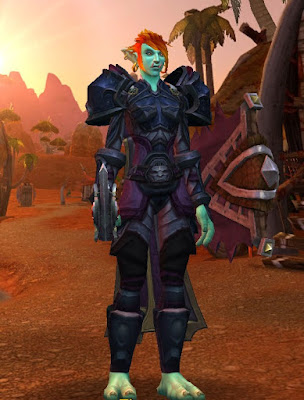 It was weird for me to be leveling my warrior this late compared to my other alts, but I wanted to get at least the basic parts of alchemy, inscription, and jewelcrafting opened, and she just has blacksmithing, which... eh?  She's back in her Pandaria mog to go with the purple accents in the prot shield. 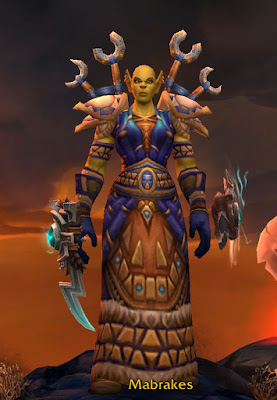 I leveled my shaman so I could level leatherworking, got through chasing down the Elderhorn, and... I haven't maxed leatherworking yet to actually learn how to make the mount.  This is the set that says "shaman" in my head. 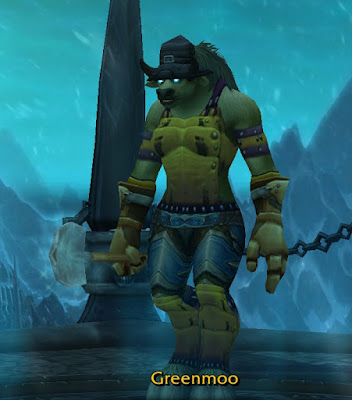 So, uh, yeah.  My death knight.  I picked her first out of the "classes I haven't leveled" group once I was through leveling an alt for each profession.  This plate chest is a recolor of the Gothic plate, I think; I like it because the matching boots don't look super clunky on a tauren or troll.  I don't haven't the matching pants, and I was originally trying for an overalls look to go with the shovel, so I went with a basic blue plate.  I've got a skimpy red mog that matches the blood weapon, but red just doesn't look good on her.  Since they redid the models, she's not the right shade of green to match the Warleader set anymore. 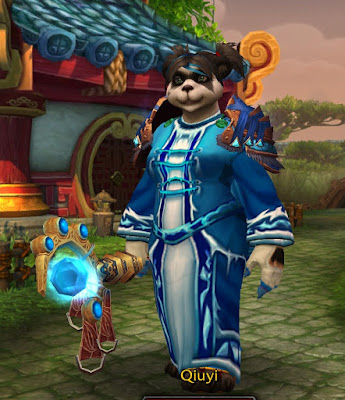 Next in the "classes I haven't leveled" group is the frost mage, who will probably hit 110 during the next invasion I'm awake and home for.  This may be the only mog I've done with the old Wrath frost resist crafted gear that I've actually liked.  I haven't found a cloak I really like for this set, though. 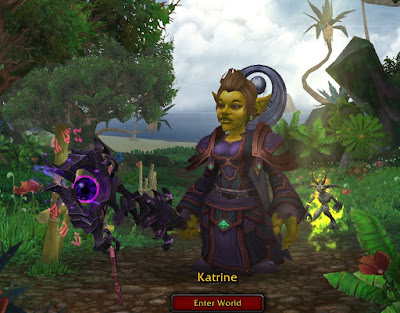 I haven't found a mog I like for the warlock that really matches the destro staff.  She's going with "meh purple" right now.  I'm sorely disappointed in the lack of void-colored armor now that we've seen the patches of it on Argus - it's gorgeous, the black-black with the purple highlights, and it really should have shown up in the warlock gear, dammit.  Or at least some shadow priest stuff that wasn't class specific so my warlock could use it. 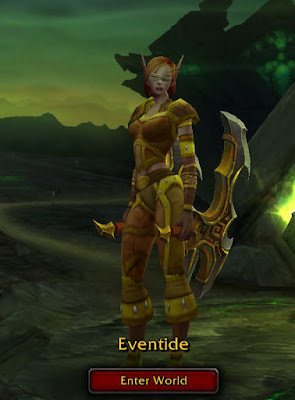 Prior to getting her artifact, I had my demon hunter in the Bard's leather set.  Once I got them, though, I poked around and found another low level leather set that worked with them. 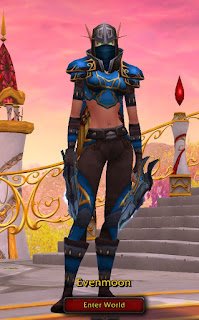 Yeah, so I had the Night Watchman drop, and someone had to get it in their mog.  Once I got the windwalker weapons, I knew it was going to be the monk, with these pants that I really like.  I have no idea what I'm doing on my monk, but she looks pretty cool. 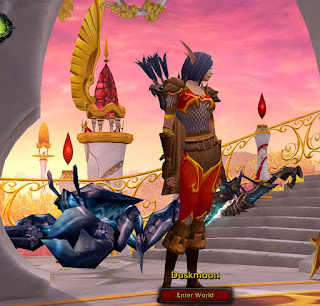 I'm not sure I can ever change this mog.  I didn't realize how much of this set I had till I started poking around with something for her, and...  Yeah.  I need to get a Thas'dorah color that matches this, since I like the way the quiver looks on her. 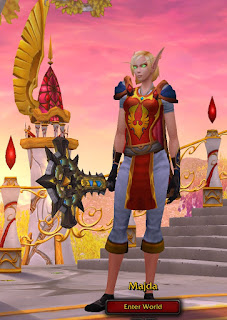 This is leveling gear from the Barrens, plus the base disc staff and probably mid-40s dungeon gear accents. 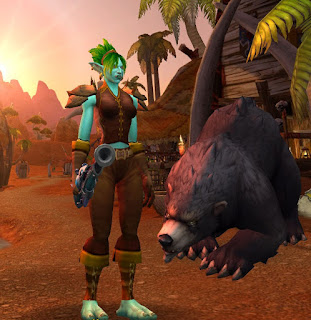 My troll hunter has a raptor, too, but the bear was out when I took the screenshot.  I figured I should try playing BM on at least one of the hunters.  I don't really care for the gun, but I have plenty of models I can switch it to.  This is the actual Talhide set... except the shoulders, which I used in Duskhawk's mog. 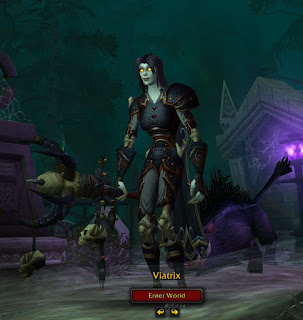 This is mostly level 30s quest gear, and I love it on my undead hunter.  She gets to try out Survival, so I mogged her with Gul'dan's staff, since my warlock isn't using it. 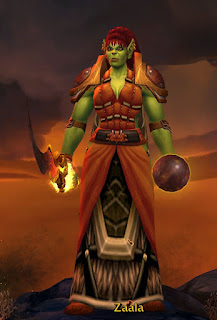 Guess which spec this mage is!  Mages have some of the best spec-themed mog options. 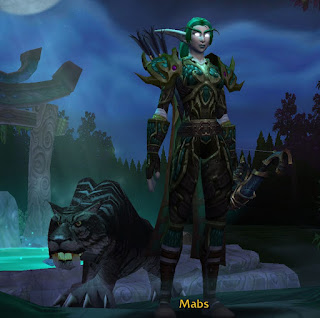 I've started sending Mabs my extra Argussian Reach and Army of the Light rep tokens in case I need it to get the new races in the next expansion.  I think she's wearing PVP gear, since it matched her hair.
Posted by Kate at 11:08 PM No comments:

I don't do crowds, so the virtual ticket is pretty much the best option for Blizzcon for me.  Some of the main themes of the next expansion - Kul Tiras, Zandalar, Queen Azshara - were all things I was expecting to see.  Which is weird - I never guess right about what's coming next.

I wasn't really expecting the sub-race options, but I pretty much know what alts I'll roll to probably leave unleveled for all the new ones:
I'm curious how many other sub-races/allied races we'll acquire in the long run.  There are some obvious possibilities already:
There are also less likely possibilities:
I don't know just how much work it takes to convert an NPC race to a PC one - I'd imagine there are emotes and animations to design and map, adjustments to make for armor, and in some cases updates graphically to bring the models up to current game standards.  You may have noticed with some polymorphs and costumes that some models lack things like swimming animations.  They do at least have existing territories and lore.  Hopefully these first six go well and they can expand on it going forward.

So far as the increased focus on the faction divide... eh.  I'd like to play more with my mom, but she plays a lot of humans.  I play a lot of tauren and forsaken.  I'm hoping the changes in PVP/PVE server stuff means that eventually you'll be able to communicate and group with people of the other faction outside the faction capitals if you're not flagged for PVP, but that's not this expansion.  Years ago I had a literal dream about being in a cross server queue for running a dungeon, basically standing around in a room with various other characters waiting for them to call five of us to go in next.  Maybe next time?

About the only interest I have in Classic servers is to go see Auberdine again.  I... can't really quest in Darkshore anymore, which seems kind of silly, but I spent so much time there.  It took me something like 28 days /played to level my first night elf.  I hearthed to Auberdine for probably 8 months.  It also took me till level 48 to get my first mount, so other than Auberdine tourism, they don't hold a lot of appeal for me.

I'm looking forward to the zone scaling, though - I've stranded more than a few toons at the Outland/Northrend boundary, maybe because Outland is more removed in memory.  At this point I wouldn't mind mostly skipping Cataclysm for Pandaria, as well.  I haven't enjoyed zone quest set-ups where you basically have to unlock the zone to wander around and find quests.  Let me wander in and do random crap, especially on alts.  I do pretty much everything on my main, but after that I just kind of want to get the toon through to get to leveling up trade skills.
Posted by Kate at 1:59 PM No comments:

My ilvl has only gone up a little, but that's about the same kind of boost in raw numbers that I saw from initially switching to Sidewinders a few weeks into normal Emerald Nightmare.  I didn't like doing it; I like the on-demand instant shot that Arcane Shot has become, and other than kind of switching Marked Shot for Serpent Sting, it's the same three shots that were the core of my Molten Core rotation.

I realize a lot of hunters are disappointed in Marksman (and Beast Mastery) right now, but playing at the level I am (where that 308k on Nythendra is kind of a personal non-trash best), I'm really happy with my numbers.  I'm also really happy to have some traps back.

After this long, I had gotten used to the Sidewinders/Marked Shot AOE, but by the time we got to Dragons trash I was pushing out relatively decent numbers again.

Overall, across our raid group, the patch was good.  We steamrolled through H-Emerald Nightmare, beating our record times for both Cenarius and Xavius, andwent for a couple easy kills in normal Trial of Valor, but no one wanted to go through then minutes of Helya after all that.  Sunday we're going to look at heroic Trial of Valor and see what it looks like now.

Still want some kind of really AOE (either damage or heals) for my discipline priest, but that doesn't seem likely at this point.
Posted by Kate at 11:00 PM No comments: