Screenshots or it doesn't count (Halion)

Yeah, my monitor is huge, heh. 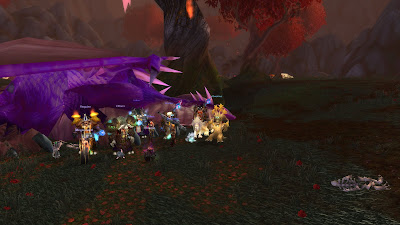 I'll admit that, after we downed the third mini-boss in the Ruby Sanctum last night, I was initially underwhelmed by being confronted by a giant fuchsia dragon. The only lasting disappointment, however, is the color.

The trash took some time - the dragons have a lot of health. There was much giggling about "Help me! I'm trapped in this tree!" The first miniboss (on the left) wiped us once because, hey, raid marks don't stick when he splits. The first of the five-dragon trash packs half-wiped us, but we quickly picked up that the commanders had to die first, and splitting the second of those packs went much better. The second miniboss, the drake, almost wiped us, because, hey, that patrol comes over really close, but we recovered with only two deaths. (And, hey, another chance to use Tranq Shot.) After that, the third miniboss was surprisingly not too bad - misdirecting the adds as they came in made it much smoother after the first wave. I think all that took us maybe a half hour.

Halion took us the next hour and a half or so; I was 6 minutes into my third flask when he died. (Note to self: Get more flasks before Thursday's raid.) To be honest, I didn't mind the wipes. This is, hands down, my favorite raid encounter of the expansion. (Sorry, Ony! You're still my favorite Vanilla raid boss.) I think I like it because while it requires "don't stand in the fire," the actual fire is forgiving enough to let you move out of it, and there's plenty of room to maneuver. The basically insta-gib laser in the Twilight phase is, if you're paying attention to the rotating orbs, easy enough to avoid, but not forgiving if you're not watching for it. Good DPS was important, but it wasn't a DPS race; balancing DPS, backing off or jumping over to the other phase if needed in phase 3 was more important.

In short - it requires coordination, it requires some precision, but it's not as frustratingly unforgiving as Sindragosa. (Sindragosa could have been much more fun if the whole fight were just phase 3. Maybe without chaining ice tombs.)

If the Ruby Sanctum is indicative of Blizzard's continuing evolution of raid encounters (that is, if it at all foreshadows what bosses in Cataclysm will be like), Azeroth 2.0 can't come soon enough.
Posted by Duskhawk at 1:48 PM No comments:

June has been a busy month, and it's not even friggin' done yet. The first three weeks basically went vacation, Kingslayer, conference. I found Sindragosa to be a much more difficult fight than the Lich King was. Maybe that's just me, though. (I'm so glad I switched to rocket boots.) I'm still toting around Bloodsail Admiral from Memorial Day weekend, though.

There's been mild drama in the guild, but it's not so much of the volcanic argument type as the slowly simmering personality conflicts eventually pushing someone to go. It really sucks for those of us, officers or members, who like all the people involved. I don't like feeling as though I've disappointed other friends by not being able to keep all of us together in the guild. But at the same time, I learned to accept several things a while back that have helped me deal with it.
One of the hardest things is that some people don't recognize that they are part of the problem. They expect everyone else to conform to their expectations or standards and don't realize that maybe it's their expectations or standards that are part of the problem. If there are problems, I generally assume that I'm contributing to them somehow, and look at what I've done or how I've interacted with people to see if there's anything I can do to remedy the problem.

I've had a lot of friends leave the guild over the past four and a half years, but I think, in an MMO, that just happens. Their goals shift, and they want other things out of the game. Or there's someone that they're just tired of dealing with. And it's a game; there are ways to keep in touch and continue to play with the people you like spending time with even if you're not in the same guild anymore. People shouldn't stay in a guild if it's going to make them unhappy.

My rogue just finished the holidays for the Violet Protodrake, and my priest should finish up tonight or tomorrow, depending how much time I have if I'm raiding tonight. Last week the guild downed Putricide in 25 for the first time, which bumps us up to 8/12 for 25s. (I think I'm personally still at 6/12.) Hopefully I'll get to see Princes on 25 sometime - I've managed to solo-juggle kinetic bombs in 10s twice now.
Posted by Duskhawk at 10:36 AM No comments: