I picked up the 2-piece tier 13 recently, and I've been staring at my focus bar again, watching it sit way too full and debating what to do about it.  The obvious answer is to use more focus, but I couldn't cram in enough Arcane Shots in to burn off the excess without losing my haste buff or Serpent Sting from missing Chimera.

Enter Kill Command.  I wanted to maintain my ~10 second rotation (Chimera's unglyphed cooldown) but burn more focus, which meant using a focus dump that wasn't Arcane Shot.  Kill Command is a lot of focus, it hits hard, and it doesn't disrupt my existing rotation.  When I get the 4-piece bonus and have to deal with haste procs, then I'll have to reevaluate the rotation again and what it's most useful and feasible to squeeze in with the extra time in the ten seconds between Chimeras.

I wanted to maintain the pairs of Steady Shots before and after Chimera Shot so that when moving through the rotation, I keep the haste buff up, I'm keep Serpent Sting up by having enough focus for Chimera, and I have some focus to do something with after Chimera.  The biggest problem I had was on target switching if I happened to be at the Kill Command point in the macro and my pet was still running over, so I'd hit some other buttons and reapply Serpent Sting if needed in the meantime.

The result on LFR Zon'ozz: 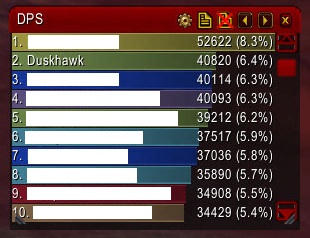 Not the most amazing of numbers, but a personal best for him.  He's a nice, easy, stand-and-shoot fight in LFR, so he gives pretty numbers to start with.
Posted by Kate at 12:13 AM No comments:

Well, I still haven't found the gloves I want for Dusk (and I haven't found a set for my shaman), but here's updated pictures of my transmogrified toons: