Now that several waves of toys have been added to the toybox on the beta, and I've done some obsessive putting-away-of-toys, I've started looking at the toys I don't have.  Some I don't have because I never bought them for lack of space; some I didn't finish out the quests or reputation for.  And of course, some of them are new for Warlords.

So now that we know when the expansion is launching, I've got about three months to level alts, wrap up quests, achievements, and reputations... and go toy hunting.  Wowhead's got a good guide for toys overall, and between that, Altoholic (to weed out stuff I have somewhere), and the beta client, I've been looking at what I can do ahead of time.


Some of the items are going to be pricy (Kalytha's Haunted Locket), and some are just going to require farming (all the Timeless Isle drops I haven't gotten yet), but I've definitely got enough to keep me occupied for three months.

Or rather, the guesstimated month or so after the 6.0 patch, because, well, inventory.  I hit up a few of the easy ones - Gokk'lok's Shell, the Gin-Ji Knife Set, and similar items - and realized that if I start collecting before the patch, I'm going to have zero bag spaces free for the next few months.

So for now I'm curating my spreadsheet, accumulating some currency, and waiting for the WoW equivalent of a Black Friday shopping spree.
Posted by Kate at 8:33 PM No comments:

The beta servers have had a couple character wipes, so I haven't done much more with it besides log over obsessively afterwards to see what's been added to the toy box.

Anyway, several of the upcoming features are enticing enough that I really miss them when I go back to the live servers.  Despite all the chaos and whatnot that it will bring, the 6.0 patch can't come soon enough in some ways.  These are my top three that I'm impatient for right now:

So yeah, this is the first thing I've been doing after character wipes: recopying toons to see what I've got that's been added to the toy box. 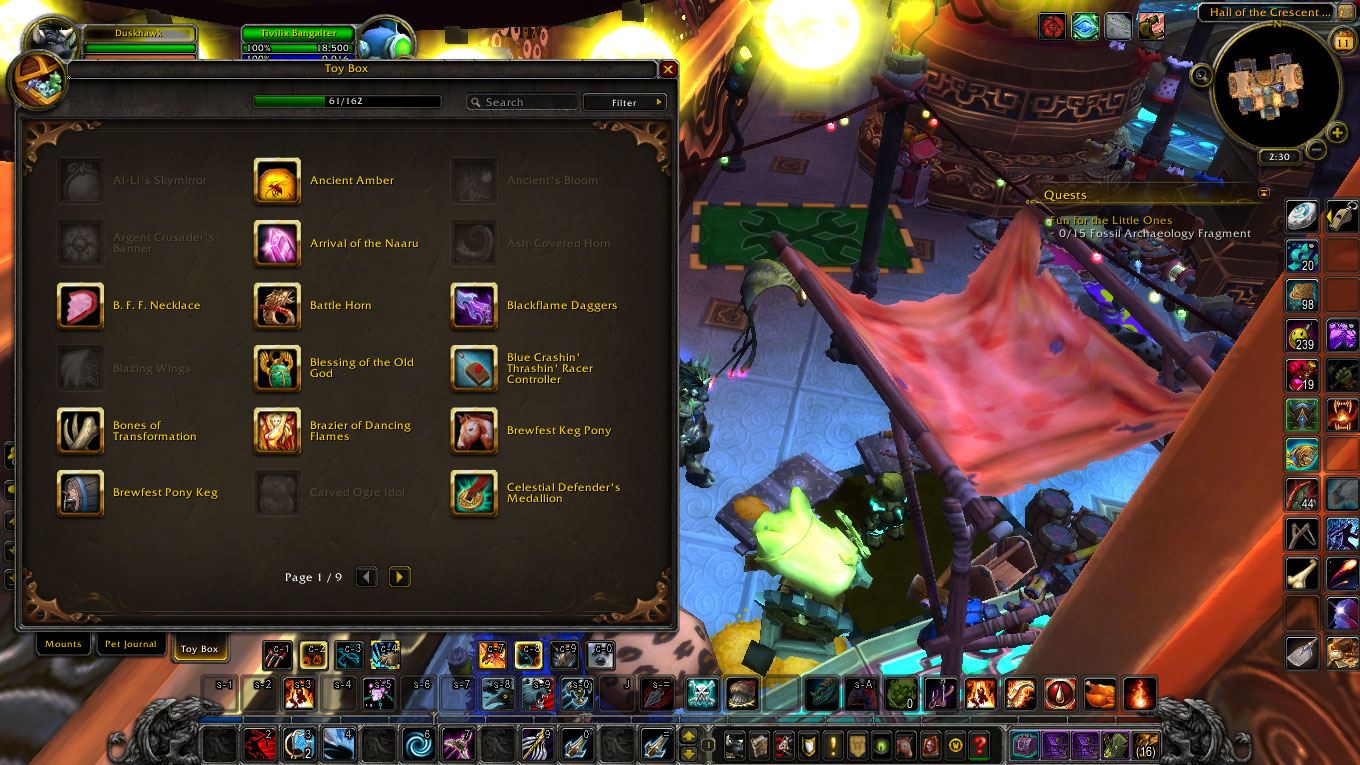 It's getting there!  I'm a bit of a collector, so having a list like this is neat because it means I don't need to make a spreadsheet.  Or at least, it gives me the list for the first column of the spreadsheet.

I... may have had a zone spreadsheet for pets before it was added into the UI.

I was initially annoyed at how the new "Clean Up Bags" sorted things, but between the dropdowns on the bags themselves and the interface options, you can easily make stuff go where you want it to now. 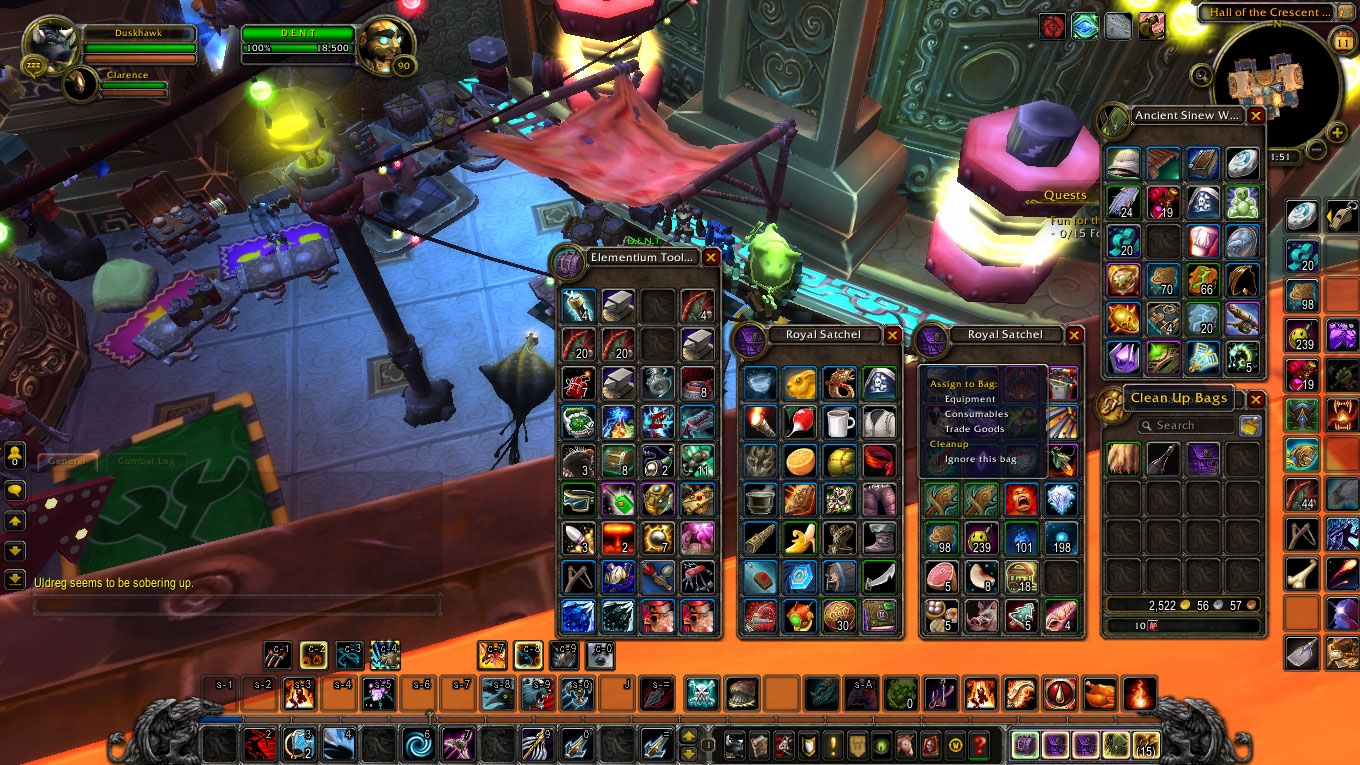 Most of my toons have one bag where I keep all their utility items - hearthstone, profession tools, the Darkmoon Faire Adventurer's Guide, and similar items.  I just have to remember to set that bag to "ignore" before sorting the first time, and it's going to be awesome.

I really miss this on my current auction toon when I've mailed myself a lot of stuff and then it intermixes with the auction mail.  It puts all the cloth together, herbs together, etc.

The reagent bank is an amazing space saver; between having basically a whole guild bank tab and most materials stacking to two hundred, I'm actually planning to packrat a lot of legacy materials that I don't bother to right now. 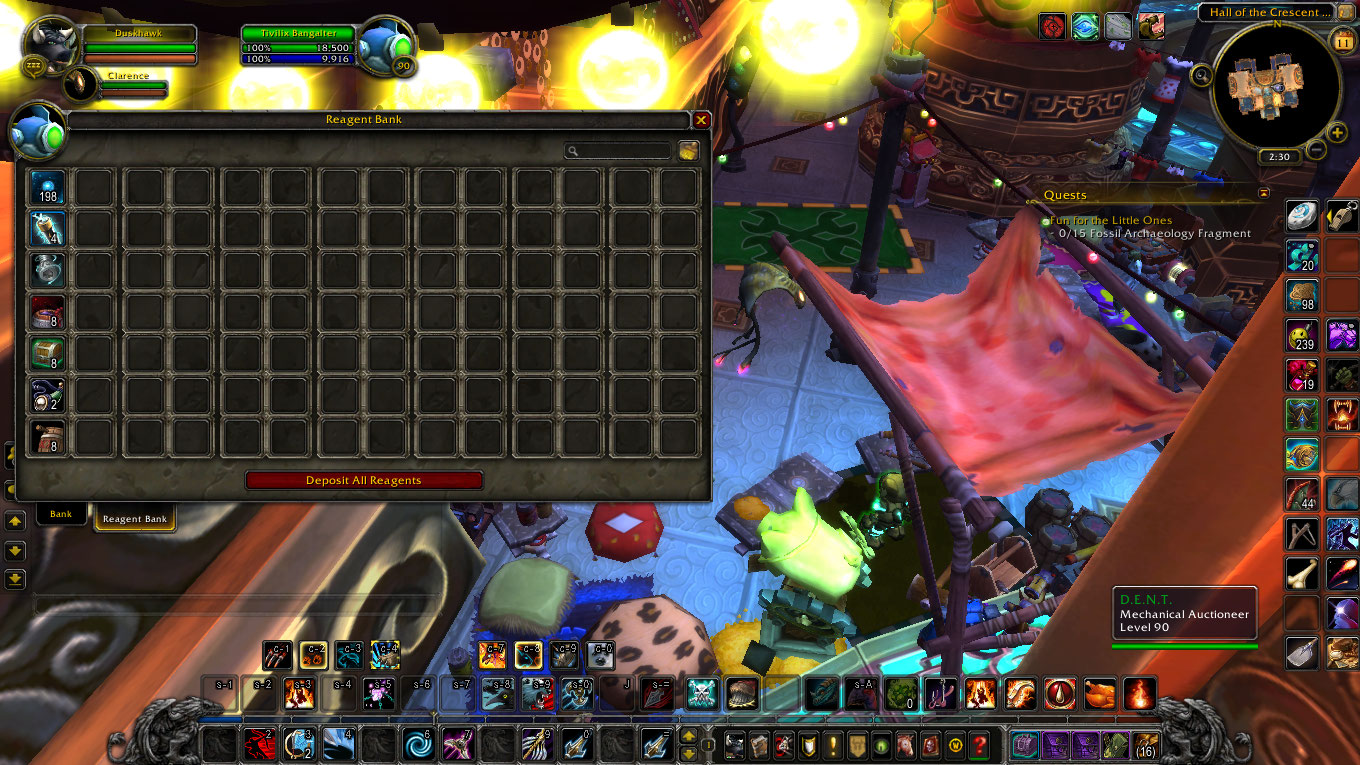 Having four alchemists, I'm still going to run into who-has-what-herbs problems, but with the ability to easily stockpile so many and to craft straight from the bank, it's going to be awesome regardless.

It's a good thing we don't have to wait till November for these parts to go in, since I really want them now.
Posted by Kate at 10:17 PM No comments: