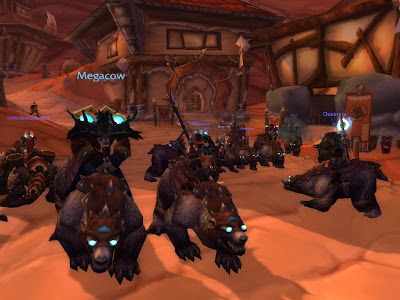 Monday night I came home from gaming (D&D) and logged in to see inquiries about whether anyone else wanted in on a Darnassus raid. I had planned to just do Brewfest dailies on my alts and go to bed, but I decided to go. So! We one-shot Velen and Tyrande with 21 people with no problems, and get on the boat to Stormwind. Varian was at 9% when too many of the PVPers by the battlemasters came over and said hi.

So tonight, when we didn't have enough for an Onyxia-25 raid, we headed back to Stormwind. Varian went down this time with a raid of about 24 people.

A few of us have Alliance toons, so we logged over to watch /trade and /localdefense. Eventually the Alliance got bored and stopped watching the tram.

So everyone logged back on after we lost Wintergrasp, and we hit Magni Bronzebeard with about 26 people. For the Horde! 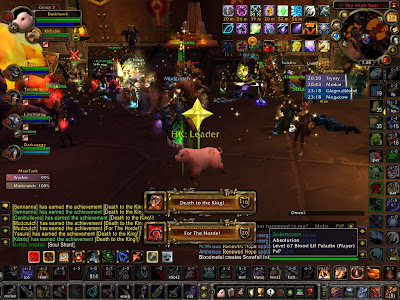 Then hearthed, flew back to the Zoram Strand, went back up to Exodar and Darnassus and wiped out those bosses again.

Bears for everyone!
Posted by Duskhawk at 12:15 AM No comments: 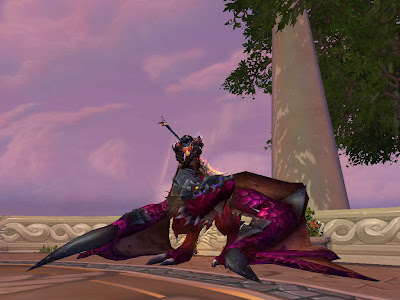 I think he looks rather sassy at that angle, don't you?

Yes, he's 310%, and I owe my guildies lots of props for the help over the past year - especially with Halloween and Brewfest; I can't remember at the moment whether the others required groups.

I also picked up the pink baby elekk this morning (#92 for small pets).

And, ahem, I was made guild master last night. Our GM of almost five years is crazy busy with school, and won't be able to play for much of the next... 6 months? year? Sad to see him go, even temporarily. We gave him a send-off in Booty Bay with Pirate Day going.

Second time I've inherited an online group - I got made leader of my clan on the MUD I used to play on after the previous leader quit playing. Hopefully I don't screw this up.
Posted by Duskhawk at 3:23 PM No comments:

So, since I'm trying to consolidate down to one WoW-related blog and one non-WoW blog, there will be non-huntery posts here.

Anywho, I'm full on Bronzebeard. I have three toons under level 70, one being a level 66 death knight, a level 26 rogue (my bank guild toon), and a level 18 warlock. All the other toons have a profession at high levels, and I don't to transfer off my night elf hunter because I still want to be able to check the auction house over there.

The complication is that toons off Bronzebeard pretty much never see level 20. (The exception is a human paladin I transferred off when it was free, at level 36, to free up a slot. She's still 36.) I admittedly don't have a ton of interest in playing a goblin or a worgen, other than the starting zones. (I did the same thing with a draenei - starting zone, and that's about.)

No, what I want to play is a dwarf shaman.

I have an orc shaman; she's level 70, elemental, and tons of fun. I've never really played a dwarf - I have a level 2ish one somewhere, I'm sure, but I don't do anything with them. I have three hunters, two rogues, and I deleted my second priest. My warrior I'm content with having just one, and paladin just doesn't do it for me. I think these are major contributing factors to the lack of dwarf, besides that they're Alliance and I, ahem, am for the Horde.

I'll confess, part of it is the hair. My orc has the 3 foot braid, and when she casts, her hair does a flying-in-the-wind animation. Dwarf women have the same long-hair kind of options, I think, and I for some reason find the idea of a dwarf shaman intriguing.

Maybe on an RP server, but honestly, the only reason I ever talk to people on Bronzebeard is because my husband got me into a guild (which subsequently merged into a larger guild)... and I'm sure there are people in the guild who wish I would stop talking sometimes. I'm painfully shy around new people. Online I'm better, but I'm still not likely to approach people. So I'm not sure if there's a point to playing on an RP server if I'm never going to RP outside my own head.

And then there's the whole problem of my gnome (deleted at level 11) being my most-hit-on character ever. I'm wondering if a dwarf female would have similar problems.
Posted by Duskhawk at 3:46 PM No comments:

Brief thoughts on the Cataclysm

The leveling guide will continue shortly.

In Cataclysm, hunters are going over to focus. I've heard that in the pre-release versions of WoW, focus was the planned resource system for hunters, but for one reason or another, we got switched to mana. This is probably the biggest change I saw for hunters coming out of the eventual 4.0 release; I'm looking forward to it. It'll take some relearning, but we simply have too many stats to watch right now. Cutting Int out of the equation entirely is good. I have a level 74 rogue, so I'm not unfamiliar with that style of resource.

Haste, on the other hand, will change some things. Haste will make focus regenerate faster, but since it won't affect our attack speed, that also means that our autoshot speed is probably going to be less mutable, and Rapid Fire and Improved Aspect of the Hawk procs will be more important to watch.

Attack Power on gear is going bye-bye. (/cheer) I loathed the switch from 2 AP from Agi to 1 AP from Agi and AP on gear since it happened. (From my enchanter's point of view, things are going to get... weird. All those Spellpower and Attack Power enchants are probably going away - possibly to be replaced with Agi, Int, and Str enchants? We'll find out!)

The change to talents - paring out passive stat/damage boosts for "fun" talents - should prove interesting. I play heavy MM in both my specs, and 5 more points means you should be able to invest enough into a 2nd tree for the first or second mastery bonus.

I like that we'll be coming back to Azeroth. I'm looking forward to underwater mounts. (I'm sitting at 90 pets/90 mounts right now.)
Posted by Duskhawk at 4:10 PM No comments: