I like some random, inane stuff.  Tiny cute things.  Anything green.  Completely extraneous Easter-egg stuff.  So over the course of WoW there's been a lot of random stuff I've like from each expansion, regardless of whether there were other things that drove me batty (like gated profession stuff and losing both ships on a 92% mission fail).

But this is about stuff I like, so here's some of them:

Fished up bosses.  The first of these (as far as I know) was Gahz'ranka in the original Zul'Gurub.  Unlike later fished up bosses, like the Lurker Below and the Pandaria fishing quest bosses, Gahz'ranka required a process to fish up.  This is also why I was a bit irritated about Nat Pagle forgetting who I was every expansion - he taught me 225-300 fishing skill.  But yeah, I liked that having done what a lot of people hadn't in Vanilla (maxing fishing) was useful for something besides obscure food.

Long quest chains with both strong emotional payoff and decent equipment rewards.  The Major Windsor escort through Stormwind (and Bolvar's subsequent badassery).  The Cipher of Damnation (Burning Crusade edition).  Alas, Andorhal.  The Battle of Darrowshire.  Drakkuru.  Zul'Drak's troll gods quests.  Terokk's story in Spires of Arak.  When I specifically seek out these zones to quest through again, it means they're doing something right.

Zapthrottle.  So I'm still carrying around my mote extractor.  As an engineer, I loved suddenly having resources that only I could gather.  I may have occasionally frustrated people by being en route to some group thing and getting distracted chasing down balls of gas.  It was worse than ore tracking.

Floating islands in Nagrand.  They're so full of Easter eggs, and they were fun to go hang out on if you had to afk for a bit.

Water with currents.  After how many years of waterfalls and such, Pandaria finally gave us water that would pull us around!  I especially liked the currents off the southern coast of the Dread Wastes.

Phasing that lets us change zones over time.  One of the things I was a bit sad about until phasing went in was that, no matter what we did in WoW, nothing changed.  You go help someone out and as soon as you leave, it all resets.  But in Mount Hyjal, we helped beat back the Twilight's Hammer and start the healing of the fire-scorched areas.  In Pandaria, we contributed to the devastation of some of their pristine areas.  In Deepholm, we repair the World Pillar.  And Gilneas!  Oh, Gilneas.  One of the things that impressed me most in the Cataclysm beta, playing through Gilneas for the first time, was that the moment of the cataclysm itself - so bluntly shown in Kezan as Deathwing disrupts a sports game - you feel it when the devastation hits, and your village begins sinking into the ocean.  It was visceral and amazing.

So, uh, sorry, west coast of North America.  It's going to be devastating when you fall into the Pacific, but it's going to be amazing for your narrative.

Tol Barad.  I liked that some PVP opened up some basically PVE daily quests with mount and pet and gear awards for the related currency.  The zone was interestingly creepy, as well.  I suppose Winterspring was also in this vein, but Tol Barad felt more polished.

The Seahorse in Vashj'ir.  The only thing I didn't like about it was that you could only use it in Vashj'ir.  Going fast underwater was almost better than flying.  It didn't hurt that the place was gorgeous.

The turtle boats in Northrend.  It was slow, but it was a nice thematic touch for the Tuskarr, and when you forgot which zeppelin went where as frequently as I did, it made schlepping over to the other end of Northrend prior to having flying much easier.

Garrison followers.  I love my bird-buddy Ishaal, and a lot of the followers just make me more connected to Draenor in general.  I may hardly leave my garrison, but I do have cool people hanging out with me.  When I'm not making them do random menial tasks.

NPCs that use class-specific skills.  The last boss in Nagrand's Ring of Blood shaman-popping.  Yrel in that Talador cutscene.  Anytime I see NPCs we're interacting with behave the way I'd expect someone of that class to - it's just awesome.  (Seriously, I kinda teared up when Yrel popped wings in that video, because Yes! That is a paladin!)

Rexxar's rat innkeeper.  Because it's cute and adorable.

Pet biscuits.  Because rats bigger than gnomes are awesome.
Posted by Kate at 5:00 PM No comments: 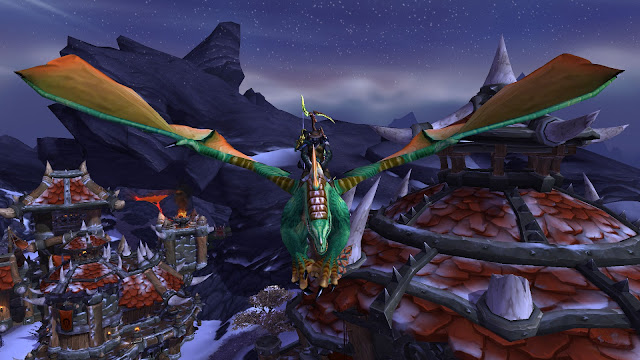 I forgot to post this back in February.
Posted by Kate at 3:09 PM No comments:

So as I'm logging around my level 100 toons today, when I got to my shaman, I suddenly realized I didn't know if she was going to have a spec that she could transmog into Gorehowl with the artifact weapons.  I don't play enhancement, and I remembered that elemental is getting a fist weapon (cool enough), but... Gorehowl?

Not all of my toons have weapon transmogs that I care about; my mage, for example, has the basic Draenor staff because all the staffs I like to go with her transmog are bound to other characters, and at this point I'm not buying duplicates when the looks are going to get shared so soon.

Some of them, though, I'm probably going to have to change.

Hunter (main), marksman
Currently:  Golden Bow of Quel'Thalas
Changing?:  Nope, hunters have been able to transmog between ranged weapon looks for a while, and Marksman is getting the bow artifact, anyway.  The Windrunners are cool, and all, but I'm a Tauren.  My alt hunters by and large don't really have a preferred mog weapon, although my original Night Elf is tranmogged into the Gorewood Bow (Blightcaller raids, heh) right now; most of them may use the artifact looks. 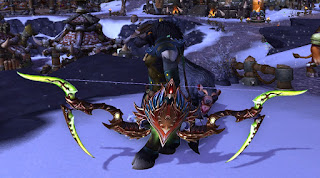