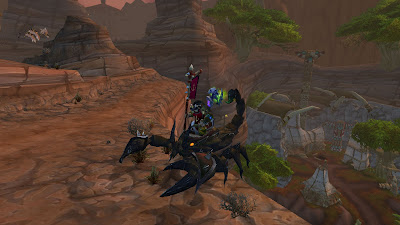 We can now rent cars without paying extra for insurance. >.>
Posted by Duskhawk at 12:43 AM No comments:

Last Monday, my guild hit level 23. At 23, the caps on guild experience come off, and if you're crazy about grinding raids or heroics, you can hit 25 in a very short amount of time.

We're not that crazy - two of our raid nights this week were devoted to Nefarian (a fight I am unexpectedly in love with, despite dying twice on many attempts), so we're sitting pretty about 20% into 24 as of when I went to bed last night.

That 10% discount at level 24? It applies to flight training. That was the push I needed to buy fast flying on the two toons I'm currently trading off leveling.

I took my shaman into Vashj'ir this week to try to get deepsea scales for leveling leatherworking (and guild experience from quests); I hadn't done Vashj'ir on my priest or warrior, so I haven't really touched the place in four months. I still love it. Viatrix, on the other hand, is at level 70 in the Borean Tundra. Fast flying will make Northrend much less painful, and I'm looking forward to hitting Zul'drak again.

I'm eclectic in my WoW loves - female undead animations, tauren architecture and city planning, troll lore, my orc's hair while casting (3-foot wind-whipped braid: awesome). I think most of what I like about my blood elves is that they make feminine look bad-ass.

Level 25 will bring us scorpion mounts and mass resurrection. The mass summon has been pretty awesome so far - raids, "crap, my hearth is still set to Dalaran," "crap, I'm stuck, and can't hearth," etc. It was nice when you could summon someone who fell into a bad spot in a dungeon but didn't die back to where you were, but I understand why they disabled inside-dungeon mass summoning. Mass resurrection is going to make feigning or vanishing despite a bloodlust debuff desirable again, I think.

I'm dubious about the scorpion mounts, though. The stinger is right behind the rider's head.
Posted by Duskhawk at 1:08 PM No comments: