I really did intend to do the new 5-mans yesterday, but I came home and ended up sleeping for two hours.  So while there were no new dungeons run, I did get the formerly Valor Point/now Justice Point neck and ring, then bought bracers for my shaman and warrior.

And of course, I got a boatload of new ponies.

New ponies whose wings flap when they walk, not when they fly.

But anywho!  There were several quality-of-life squee moments yesterday:
I'll get home late enough tonight that I'm probably still not going to get a chance to run the new dungeons, but I may do some more rare hunting and farming now that I have more than 2 slots free.
Posted by Kate at 7:26 PM No comments:

I have an Intellimouse Explorer 3.0, and I love it to death.  Literally: I think I'm on my third.

A lot of my macros use mouse:1, mouse:2, and mouse:3 for targeting the same spell, not just for my hunters, but also for my priest.  (Button:4 is bound to Escape, to stop casting, and button:5 is bound to, ahem, Fishing.)  Mouse:3 is also my Ventrilo push-to-talk key, and has been for five years.  This hasn't been a big deal; I don't use mouse:3 targeting much on my hunters, which are usually what I'm playing when I'm on Vent.

My priest, on the other hand?  Mouse:1 is generally @self; mouse:2 is @focus, and mouse:3 is the unspecified cast, which means whatever I target or whichever party member I hit the function key for or click on.  Most 5-man dungeons I can just get away with Atonement splash healing with Penances on the tank (@focus casting), but raid healing tends to require a lot more direct healing.

I didn't raid heal much in Wrath of the Lich King; maybe three or four times.  In Burning Crusade, on the other hand, my priest was just as geared as my hunter for most of the entire expansion.  She healed for Karazhan; she healed for Gruul's and Magtheridon's Lairs; she healed in Zul'Aman.  Other than the last 800 reputation for the Caverns of Time faction, I even did the reputation grinds to get her the enchanting and tailoring patterns from reputation.  I healed with a hybrid 33/28/0 Discipline specialization, and I actually found it relaxing compared to the pressures of maintaining DPS levels on my hunter.  Karazhan was the raid that pushed me to actually start looking at hunter mechanics and for which my shot rotation macro was born.  For my priest, though, she was one-half of the guild's first two-healer raid through it.

In Wrath we tried very hard as a guild not to end up in the same rut we'd been in Burning Crusade, mostly running Karazhan for three or four combinations of alts and never progressing out of the first tier or tier and a half of content.  This meant I didn't really raid on my priest much, and given how fantastically we progressed through the raid tiers in Wrath, I was content with that.  I missed raid healing, but I would rather see my guild progress.

So now we're running Firelands, and we had been running alt/main Tier 11 raids to get people later to raiding more up to speed.  I had mostly been running on Duskhawk for these when I went, since we had plenty of people wanting to heal, but I took my priest a couple times recently to make the raids happen when we were short a healer.  So my priest has about one and a half Blackwing Descent runs under her belt.  Raid healing is an entirely different strategy from Atonement healing for most fights; a few (Omnotron Defense System, especially, but even Magmaw if I'm tank healing) actually work quite well with it, but many fights end up Prayer of Healing/Penance/Shield focused.

A couple weeks ago we switched from Tier 11 alt runs (waning interest) to Firelands alt runs (more interest and, since we're clearing it in about two nights, more slots per week needed to get mains in).  Like I said, I have about one and a half Blackwing Descent runs under my priest's belt; last Saturday I ended up taking her to the alt Firelands run.

It was terrifying!  I had an awful time figuring out where to stand so I could reach both tanks on Shannox (but I managed not to stand in any traps, woo!), and on Beth'tilac, I was immensely frustrated by Prayer of Healing's party-based targeting.  We tend to run in three groups for her, with the Phase 1 Beth'tilac tank and his/her healer in Group 3 and everyone else over in Groups 1 and 2.  I just couldn't seem to manage Penancing the targeted tank in Phase 2 and to still do sufficient Prayers of Healing on the other two groups in three groups.

The main thing I ended up getting out of that raid (besides a staff) was that I needed to rework my Penance macro to handle tank swaps.  I use default raid frames while healing, plus Decursive, and everything is smooshed down in about a six-by-eight inch area of my screen, by the parts of the toolbars that I use for most of my healing.  My DBM warnings are also dragged down there, along with the timers.  So my set-up is pretty basic, and pretty focused.  My Penance macro, for the longest time, was


This was unlike all my other healing macros, which look like

I really didn't need to target myself with penance; I have Alt set as my self-cast button, and I tend to just Shield and Alt:Renew myself if I need healing.  To handle a tank swap without changing focus targets or targeting my non-focused tank, I needed to change up something in that standard macro line.  What I ended up with was

This lets me maintain the boss as my target for Atonement opportunities (because if I can sneak in some stacks to pull out Evangelism, woohoo!), and when I hit Penance with button 1, whatever tank is getting facemelted gets the Penance.  When we did Beth'tilac last night, I was able to manage just fine with the three-group setup.  There are occasional hiccups; I'm pretty sure I Penanced Baleroc at least once last night when I had a tank targeted.

Speaking of Baleroc and mouse buttons and macros:  this is what I actually meant to write about today.  So I got pulled into healing Firelands again last night, and you've seen my healing macro pattern now, and I've told you I use middle-mouse (mouse:3) for Vent's push-to-talk.

Baleroc is a healer rotation fight, at least the way we run it. You spend two cycles healing shard targets and then switch to the tanks on the third shard in your rotation.  Since this means hitting targets as they get the shard debuff (the little blue person icon, I know now - DBM puts marks on them, but as I've said, I look at a 6"x8" section of the screen while healing, and if it's outside that area it doesn't exist), it's a lot of mouse:3 healing.

Mouse:3 healing, which is my Vent key.

As this was my first time ever healing Baleroc, and fourth time this expansion raid healing at all, I was doing a lot of talking to myself and swearing.  About halfway through the fight, I realized:

They thought I was asking if they could hear me, because I got a, "You're cutting in and out," response.  I was more concerned that the swearing was coming through, but apparently the "F--- me," that came out during one of my "which tank is getting hit" panics didn't come across.  (I still use oRA2, and my target-of-target for it just creeps into my healing field of vision, so I started using that to pick my tank healing target.)  I temporarily remapped my Vent key for the rest of the raid. >.>

Random coda:  On the drive in to work this afternoon, I realized: Wait a minute.  Baleroc, who has fire and shadow attacks.  Balrog, a creature of shadow and flame.  /facepalm
Posted by Kate at 2:16 PM No comments:

So, I looked at the page-view stats for this blog for the first time today, and mostly it was kind of depressing, because they're about seven times the stats for my other blog - and I haven't written anything here since June.

There's a really simple reason for that - huntering hasn't really changed dramatically over the course of the past year.  Firelands added some new pet models (and Deth'tilac, as much as I hate spiders, is very pretty), but none of them have tempted me to try taming them.  Heck, I didn't pick up Skoll until this expansion (looking for the Time-Lost Protodrake, of course).  I don't go looking for most rares for taming purposes.  (As much as I love Har'koa and the Zul'Drak quests, her boyfriend is so dead if I ever find him.)

But no, this expansion has been pretty stable for Marksman PVE.  The secondary stat numbers (haste, specifically) for when one's rotation changes (adding a Steady or an Arcane, basically) are so huge that you really don't need to think about them.  It's not like the magic 800 for swapping to stacking Armor Penetration was.

Guild drama has been minimal all summer; raiding has been good; I still don't have the Headless Horseman's pony for Duskhawk.  Brewfest threw daggers to all my toons but my rogue.

Mists of Pandaria was rolled out at Blizzcon last week, and I was stuck at work, obsessively refreshing WoW Insider's live blogs.  I like the talent changes - 3 specs that you get your special abilities just by picking the spec, and then one talent tree of fun stuff that you can put points in regardless of your spec.  I hope improved mend pet ends up a glyph or something.

In the meantime, I've been playing a baby priest Alliance side on another server to play through the quests again - an RP server, at that, although I'm far too shy to have actually done any interactive role-playing.  When I leveled my priest on Bronzebeard, I was fashion-conscious on her to the point of getting ribbed for it - there are some awesome robes out there, and I refused to have shoulders that didn't coordinate.  I also may have used her little pillbox hat from a rare spawn in Hillsbrad well into the 50s.

I'm leveling as discipline again, partly because the dot-dot-channel playstyle of shadow has never appealed to me.  I've tried shadow, briefly, at 85, so that when I want valor/justice points on my priest and there's already a guild healer going, I can still take her, but I much prefer healing - atonement healing, that is.

Anywho, a priesty-comic I did (stick figure art!) a while back, since she's the alt I'm playing right now: 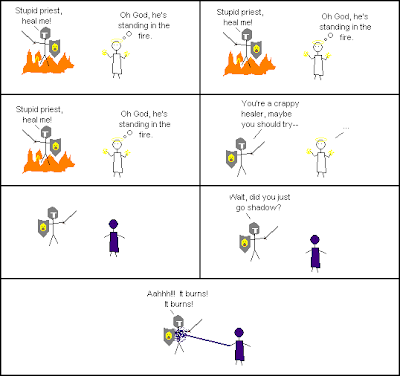